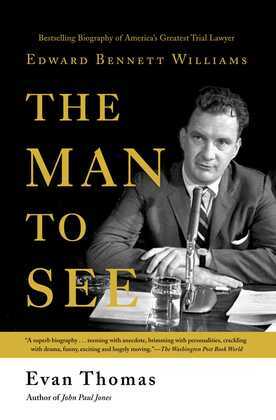 The Man to See

This bestselling biography of legendary trial lawyer Edward Bennett Williams is "a skillful and lively portrait of a larger-than-life lawyer" (Kirkus Reviews).

Legendary attorney Edward Bennet Williams was arguably the best trial lawyer ever to practice. Now, for the first time, bestselling author Evan Thomas takes us into the courtrooms of Williams's greatest performances as he defends "Godfather" Frank Costello, Jimmy Hoffa, Frank Sinatra, The Washington Post, and others, as well as behind the scenes where the witnesses are coached, the traps set, and the deals cut.

In addition to being a lawyer of unprecedented influence, Williams was also an important Washington insider, privy to the secrets of America's most powerful men. Thomas tells the truth behind the stories that made Williams one of the most talked about public figures of his time, including Williams's role in the publication of the Pentagon Papers and the possibility that Williams may have been Watergate's Deep Throat. Based on Thomas's exclusive access to Williams's papers, The Man to See is an unprecedented look at the strategies and influence of this exceptional man.