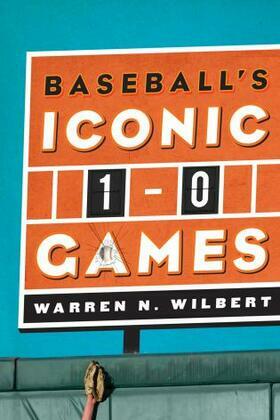 Although very few baseball games end with a final score of one to zero, and such a score line might suggest a contest devoid of drama, nothing could be further from the truth. Since the 1876 inaugural season of professional baseball, many 1-0 games have proved as compelling as those featuring a parade of pitchers and a plethora of home runs. In Baseball’s Iconic 1-0 Games Warren Wilbert has chronicled the tensest 1-0 nail-biters that have occurred since baseball’s first professional season.

Organized thematically, Baseball’s Iconic 1-0 Games starts by examining 1-0 games achieved on Opening Day, with the finest selected from the more than 50 that have occurred since 1876. Regular season games, in which less than three percent result in a 1-0 score, are then detailed, including those games pitched by such greats as John “Jocko” Flynn and Randy Johnson. Championship play, from the first inning of playoffs to the final out of the World Series, has its own share of 1-0 drama, and this, too, is covered extensively. These chapters are then followed by a look at the elusive perfect 1-0 game, of which only eight have been pitched since 1871—seven with a single pitcher. Pitching titans such as Walter Johnson, Grover Cleveland Alexander, Bert Blyleven, Christy Mathewson, Dean Chance, Ed Walsh, Guy White, and Cy Young have had more than their fair share of 1-0 victories, and an additional chapter examines these pitchers and their 1-0 games.

Appendixes include a full list of pitchers to have thrown a no-hit 1-0 game, pitching greats who have amassed ten or more career 1-0 victories, and 1-0 games in both the Negro Leagues and the Japanese Major Leagues. Featuring more than 30 photographs, Baseball’s Iconic 1-0 Games is sure to fascinate all baseball fans, players, and historians.