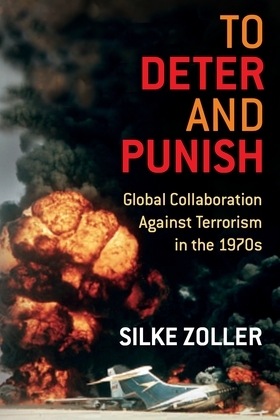 To Deter and Punish

In the late 1960s and early 1970s, governments in North America and Western Europe faced a new transnational threat: militants who crossed borders with impunity to commit attacks. These violent actors cooperated in hijacking planes, taking hostages, and organizing assassinations, often in the name of national liberation movements from the decolonizing world. How did this form of political violence become what we know today as “international terrorism”—lacking in legitimacy and categorized first and foremost as a crime?

To Deter and Punish examines why and how the United States and its Western European allies came to treat nonstate “terrorists” as a key threat to their security and interests. Drawing on a multinational array of sources, Silke Zoller traces Western state officials’ attempts to control the meaning of and responses to terrorism from the first Palestinian hijacking in 1968 to Ronald Reagan’s militarization of counterterrorism in the early 1980s. She details how Western states sought to criminalize border-crossing nonstate violence—and thus delegitimized offenders’ political aspirations. U.S. and European officials pressured states around the world to join agreements requiring them to create and enforce criminal laws against alleged individual terrorists. Zoller underscores how recently decolonized states countered that only a more equitable global system capable of addressing political grievances would end the violence.

To Deter and Punish offers a new account of the emergence of modern counterterrorism that pinpoints its international dimensions—a story about diplomats and bureaucrats as well as national liberation militancy and the processes of decolonization.