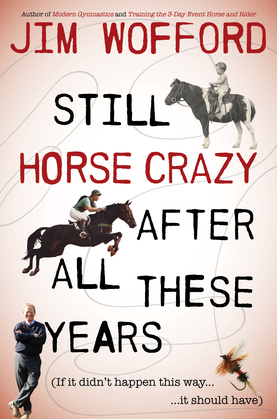 Still Horse Crazy After All These Years

by James Wofford (Author)
Excerpt
Nonfiction Nature, recreation and sports Sports & recreation Equestrian Pets Horses Biography & autobiography Sports
warning_amber
One or more licenses for this book have been acquired by your organisation details
EPUB
Unlimited loans, One at a time
Details

A rare insider’s look at the life of a professional sportsman as he tries to reconcile the passion that drives him with livelihood, family, and aging.

Three-time Olympian Jim Wofford grew up with horses, beginning with his childhood on a Kansas farm in the forties. The son of an Olympic show jumper, Wofford and his siblings all found themselves pursuing a “riding life”—one of reward and growth, of challenge and disappointment, but mostly of learning to understand and work with a complex animal as an athletic partner and friend.

Over the years Wofford developed as an international competitor, successful coach, and sought-after commentator. Known for his wit, irreverence, and whip-smart observations on the sport and its participants, as well as the state of the “outside” world, his magazine columns were soon as legendary as his performances in the saddle.

Now Wofford brings his immense talent for telling tales—all of them (mostly) true—to the page in a lively and absorbing look back through time spent in and out of the saddle. With lessons in horsemanship both simple and profound interwoven with fascinating stories from his many diverse adventures around the world, readers enjoy a peek inside the wild ride that can be the life of an international equestrian while pondering weighty questions, such as how to make decisions for the good of the horse and how to find a soulful connection with him. Although these questions may never be fully answered, readers discover something about themselves as they see how philosophical investigation contributed to Wofford’s own evolution over time. An honest, funny, poignant read certain to entertain and educate every horse person.