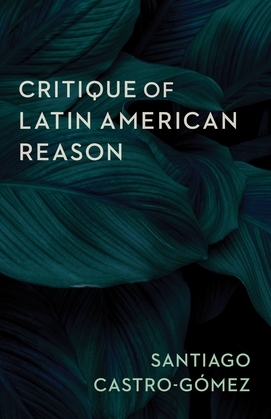 by Santiago Castro-Gómez (Author), Andrew Ascherl (Translator)
Excerpt
Nonfiction History History by country Central America
warning_amber
One or more licenses for this book have been acquired by your organisation details
EPUB
Unlimited loans, One at a time
Details

Critique of Latin American Reason is one of the most important philosophical texts to have come out of South America in recent decades. First published in 1996, it offers a sweeping critique of the foundational schools of thought in Latin American philosophy and critical theory.

Santiago Castro-Gómez argues that “Latin America” is not so much a geographical entity, a culture, or a place, but rather an object of knowledge produced by a family of discourses in the humanities that are inseparably linked to colonial power relationships. Using the archaeological and genealogical methods of Michel Foucault, he analyzes the political, literary, and philosophical discourses and modes of power that have contributed to the making of “Latin America.” Castro-Gómez examines the views of a wide range of Latin American thinkers on modernity, postmodernity, identity, colonial history, and literature, also considering how these questions have intersected with popular culture. His critique spans Central and South America, and it also implicates broader and protracted global processes.

This book presents this groundbreaking work of contemporary critical theory in English translation for the first time. It features a foreword by Linda Martín Alcoff, a new preface by the author, and an introduction by Eduardo Mendieta situating Castro-Gómez’s thought in the context of critical theory in Latin America and the Global South. Two appendixes feature an interview with Castro-Gómez that sheds light on the book’s composition and short provocations responding to each chapter from a multidisciplinary forum of contemporary scholars who resituate the work within a range of perspectives including feminist, Francophone African, and decolonial Black political thought.