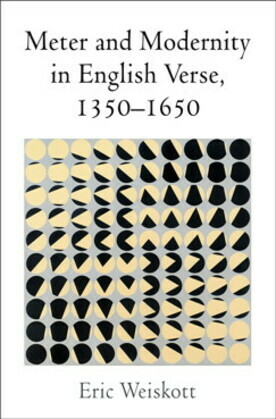 by Eric Weiskott (Author)
Excerpt
Nonfiction Literary essays
warning_amber
One or more licenses for this book have been acquired by your organisation details
EPUB
Unlimited loans, One at a time
Details

What would English literary history look like if the unit of measure were not the political reign but the poetic tradition? The earliest poems in English were written in alliterative verse, the meter of Beowulf. Alliterative meter preceded tetrameter, which first appeared in the twelfth century, and tetrameter in turn preceded pentameter, the five-stress line that would become the dominant English verse form of modernity, though it was invented by Chaucer in the 1380s. While this chronology is accurate, Eric Weiskott argues, the traditional periodization of literature in modern scholarship distorts the meaning of meters as they appeared to early poets and readers.

In Meter and Modernity in English Verse, 1350-1650, Weiskott examines the uses and misuses of these three meters as markers of literary time, "medieval" or "modern," though all three were in concurrent use both before and after 1500. In each section of the book, he considers two of the traditions through the prism of a third element: alliterative meter and tetrameter in poems of political prophecy; alliterative meter and pentameter in William Langland's Piers Plowman and early blank verse; and tetrameter and pentameter in Chaucer, his predecessors, and his followers. Reversing the historical perspective in which scholars conventionally view these authors, Weiskott reveals Langland to be metrically precocious and Chaucer metrically nostalgic.

More than a history of prosody, Weiskott's book challenges the divide between medieval and modern literature. Rejecting the premise that modernity occurred as a specifiable event, he uses metrical history to renegotiate the trajectories of English literary history and advances a narrative of sociocultural change that runs parallel to metrical change, exploring the relationship between literary practice, social placement, and historical time.