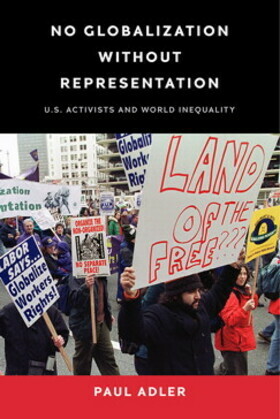 No Globalization Without Representation

by Paul Adler (Author)
Excerpt
Nonfiction History History by country United States Social science Political science Non-governmental organizations (NGOs)
warning_amber
One or more licenses for this book have been acquired by your organisation details
EPUB
Unlimited loans, One at a time
Details

Amid the mass protests of the 1960s, another, less heralded political force arose: public interest progressivism. Led by activists like Ralph Nader, organizations of lawyers and experts worked "inside the system." They confronted corporate power and helped win major consumer and environmental protections. By the late 1970s, some public interest groups moved beyond U.S. borders to challenge multinational corporations. This happened at the same time that neoliberalism, a politics of empowerment for big business, gained strength in the U.S. and around the world.

No Globalization Without Representation is the story of how consumer and environmental activists became significant players in U.S. and world politics at the twentieth century's close. NGOs like Friends of the Earth and Public Citizen helped forge a progressive coalition that lobbied against the emerging neoliberal world order and in favor of what they called "fair globalization." From boycotting Nestlé in the 1970s to lobbying against NAFTA to the "Battle of Seattle" protests against the World Trade Organization in the 1990s, these groups have made a profound mark.

This book tells their stories while showing how public interest groups helped ensure that a version of liberalism willing to challenge corporate power did not vanish from U.S. politics. Public interest groups believed that preserving liberalism at home meant confronting attempts to perpetuate conservative policies through global economic rules. No Globalization Without Representation also illuminates how professionalized organizations became such a critical part of liberal activism—and how that has affected the course of U.S. politics to the present day.