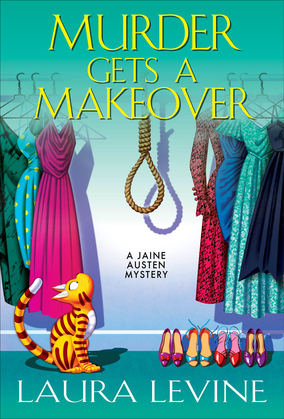 Murder Gets a Makeover

Jaine Austen #18
by Laura Levine (Author)
Excerpt
Fiction Mystery & detective Women sleuths English literature American and Canadian literature
warning_amber
One or more licenses for this book have been acquired by your organisation details
EPUB
Unlimited loans, One at a time
Details

Writer-for-hire Jaine Austen, living in L.A. with her cat, Prozac, appreciates one of the perks of working freelance—a wardrobe that’s heavy on elastic waists. But her BFF, Lance, has a makeover in mind, and it’s about to lead to murder . . .

Uber-stylist Bebe Braddock plans to juice up her Instagram feed, and thinks Jaine would make a perfect “Before & After” model. At Lance’s insistence Jaine is ushered into Bebe’s sprawling Brentwood spread to await her transformation. Yet, while the surroundings are glamorous, the atmosphere is toxic as Bebe bullies her team of assistants, and even her husband, into obeying her every whim.

Having earned the wrath of everyone in her orbit, few are shocked when Bebe is found strangled with one of her detested wire hangers. But Jaine’s prints are all over the murder weapon, making her a prime suspect. The police, however, aren’t the only ones showing interest in her—so is Justin, Bebe’s very cute, very young personal assistant. While Jaine navigates a cougar-style romance, Prozac is mistakenly hailed as a feline hero and catapults into internet fame. Still, there are more urgent matters at hand than Prozac’s swelling ego. Because unless Jaine can track down Bebe’s killer and clear her own name, the only new outfit she’ll be modeling is an orange prison jumpsuit. . .