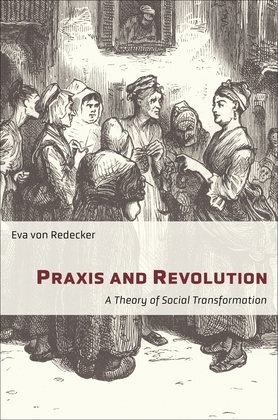 The concept of revolution marks the ultimate horizon of modern politics. It is instantiated by sites of both hope and horror. Within progressive thought, “revolution” often perpetuates entrenched philosophical problems: a teleological philosophy of history, economic reductionism, and normative paternalism. At a time of resurgent uprisings, how can revolution be reconceptualized to grasp the dynamics of social transformation and disentangle revolutionary practice from authoritarian usurpation?

Eva von Redecker reconsiders critical theory’s understanding of radical change in order to offer a bold new account of how revolution occurs. She argues that revolutions are not singular events but extended processes: beginning from the interstices of society, they succeed by gradually rearticulating social structures toward a new paradigm. Developing a theoretical account of social transformation, Praxis and Revolution incorporates a wide range of insights, from the Frankfurt School to queer theory and intersectionality. Its revised materialism furnishes prefigurative politics with their social conditions and performative critique with its collective force.

Von Redecker revisits the French Revolution to show how change arises from struggle in everyday social practice. She illustrates the argument through rich literary examples—a ménage à trois inside a prison, a radical knitting circle, a queer affinity group, and petitioners pleading with the executioner—that forge a feminist, open-ended model of revolution.

Praxis and Revolution urges readers not only to understand revolutions differently but also to situate them elsewhere: in collective contexts that aim to storm manifold Bastilles—but from within.