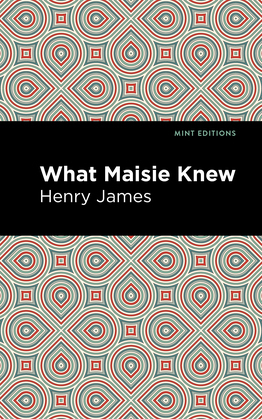 "[James] is the most intelligent man of his generation." -T. S. Eliot

"Reading Henry James is like putting a new faculty to the test. This is the true morality.”
-Anita Brookner

Henry James’ What Maisie Knew (1897) is one of the author's most piercing works of fiction, am impassioned look at the events of a young girls life as she is shuffled between her self-absorbed divorced parents. In this astonishingly modern novel, the damaging constructs of society and the illusions of respectability are seen through the perspective of an unforgettable child from her earliest years until a teenager.

Maisie Farange, only six-years old at the onset of the novel, is a child of two narcissistic parents: Beale and Ida, who are only using the young child as a pawn in their own egomaniacal games. As the bitter divorce of her parents is settled in split custody, the emotional cruelty only increases. She is cared for by two governesses; the homely Mrs. Wix at her Mother’s house, and the beautiful Miss Overmore at her father’s home. As each parent re-marries much younger spouses, and those relationship in turn fail, Maisie is entangled in a web of moral corruption and psychological abuse. James’s tragic story of an innocent child caught between the corruption of the adult world is a thought-provoking and devastating meditation on failed responsibility.