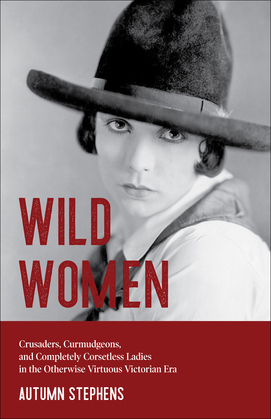 During the Victorian era, a woman’s pedestal was her prison . . .

“Women should not be expected to write, or fight, or build, or compose scores. She does all by inspiring man to do all.” —Ralph Waldo Emerson

“There is nothing more dangerous for a young woman than to rely chiefly upon her intellectual powers, her wit, her imagination, her fancy.” —Godey’s Lady’s Book magazine

But, scores of nineteenth-century American women chose to live life on their terms. In this book you will meet women who refused to remain on a Victorian pedestal.

In San Francisco, a courtesan appeared as a plaintiff in court, suing her clients for fraud. In Montana, a laundress in her seventies decked a gentleman who refused to pay his bill. A forty-three-year-old schoolteacher plunged down Niagara Falls in a wooden barrel. A frail lighthouse keeper pulled twenty-two sinking sailors out of the ocean off Rhode Island. A pair of Colorado madams fought a public pistol duel over their mutual beau. Two lady lovebirds were legally wed in Michigan. An ad hoc abolitionist spirited away scores of slaves on the Underground Railroad. A Secessionist spy swallowed a secret message as she was arrested, claiming that no one could capture her soul.

Perfect for fans of Women Who Run with the Wolves or Badass Affirmations.