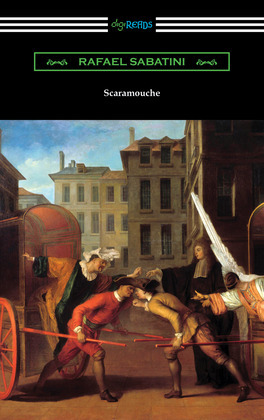 by Rafael Sabatini (Author)
Excerpt
Fiction Classics
warning_amber
One or more licenses for this book have been acquired by your organisation details
EPUB
Unlimited loans, One at a time
Details

Beginning with its famous line, ?He was born with a gift of laughter and a sense that the world was mad?, ?Scaramouche? is the entertaining romantic adventure by Rafael Sabatini, the prolific Italian-English author. Set in the time of the French Revolution, this 1921 novel tells of the romantic adventures of André-Louis Moreau, a man who has never known the names of his parents. Educated as a lawyer and living with his godfather, André-Louis becomes drawn to the revolutionaries after his best friend is killed in a duel with the aristocratic Marquis de la Tour. Moreau gives stirring speeches to the rebels concerning wealthy men who are not brought to justice, which helps set the stage for the Revolution. When André-Louis is forced into hiding for his political involvement, he discovers his gifts for acting, playwriting, and fencing in a series of entertaining events. He is a true hero as he protects the people he cares for while seeking revenge in this courtly and transformative story. Readers will get caught up with André-Louis and his noble quest to honor his forgotten friend in this charming and entertaining adventure renowned for its accurate and satisfying sword fighting and historical details. This edition includes a biographical afterword.