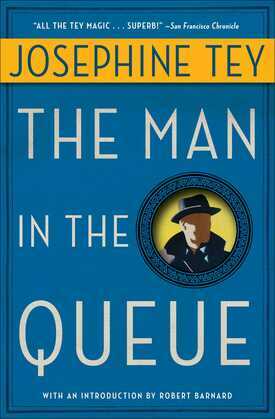 The Man in the Queue

A long line had formed for the standing-room-only section of the Woffington Theatre. London?s favorite musical comedy of the past two years was finishing its run at the end of the week. Suddenly, the line began to move, forming a wedge before the open doors as hopeful theatergoers nudged their way forward. But one man, his head sunk down upon his chest, slowly sank to his knees and then, still more slowly, keeled over on his face. Thinking he had fainted, a spectator moved to help, but recoiled in horror from what lay before him: the man in the queue had a small silver dagger neatly plunged into his back. With the wit and guile that have made Inspector Grant a favorite of mystery fans, the inspector sets about discovering just how a murder occurred among so many witnesses, none of whom saw a thing.