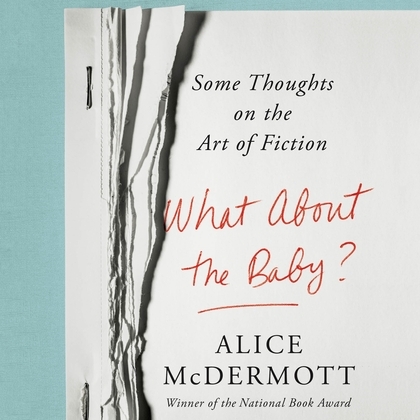 What About the Baby?

by Alice McDermott (Author), Angela Dawe (Narrateur)
Excerpt
Nonfiction Literary collections Essays
warning_amber
One or more licenses for this book have been acquired by your organisation details
AUDIOBOOK
Unlimited loans, 2 years, One at a time
Details

A collection of essays, lectures, and observations on the art of writing fiction from Alice McDermott, winner of the National Book Award and unmatched "virtuoso of language and image" (Rebecca Steinitz, The Boston Globe)

What About the Baby? Some Thoughts on the Art of Fiction gathers the bestselling novelist Alice McDermott’s pithiest wisdom about her chosen art, acquired over a lifetime as an acclaimed writer and teacher of writing.

From technical advice (“check that your verbs aren’t burdened by unnecessary hads and woulds”) to setting the bar (“I expect the fiction I read to carry with it the conviction that it is written with no other incentive than that it must be written”), from the demands of readers (“they’d been given a story with a baby in it, and they damn well wanted that baby accounted for”) to the foibles of public life (“I’ve never subscribed to the notion that a film adaptation is the final imprimatur for a work of fiction, despite how often I’ve been told by encouraging friends and strangers, ‘Maybe they’ll make a movie of your novel,’ as if I’d been aiming for a screenplay all along but somehow missed the mark and wrote a novel by mistake”), McDermott muses trenchantly and delightfully about the craft of fiction.

She also serves throughout as the artful conductor of a literary chorus, quoting generously from the work of other great writers (including Tolstoy, Shakespeare, Nabokov, Morrison, and Woolf ), beautifully joining her voice with theirs. These stories of lessons learned and books read, and of the terrors and the joys of what she calls “this mad pursuit,” form a rich and valuable sourcebook for readers and writers alike: a deeply charming meditation on the unique gift that is literature.