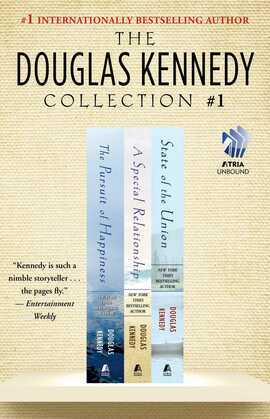 The Douglas Kennedy Collection #1: The Pursuit of Happiness, A Special Relationship, and State of the Union

The Pursuit of Happiness: Manhattan, Thanksgiving eve, 1945. The war was over, and Eric Smythe?s party was in full swing. All his clever Greenwich Village friends were there. So too was his sister Sara, an independent, outspoken young woman, starting to make her way in the big city. And then in walked Jack Malone, a U.S. Army journalist just back from a defeated Germany, a man whose world view was vastly different than that of Eric and his friends. This chance meeting between Sara and Jack and the choices they both made in the wake of it would eventually have profound consequences, both for themselves and for those closest to them for decades afterwards. Set amidst the dynamic optimism of postwar New York and the subsequent nightmare of the McCarthy era, The Pursuit of Happiness is a great, tragic love story; a tale of divided loyalties, decisive moral choices, and the random workings of destiny.

A Special Relationship: About an hour after I met Tony Hobbs, he saved my life. Thirty-seven-year-old American journalist Sally Goodchild quite literally married her hero. Both foreign correspondents, both on assignment in Cairo, they quickly fell in love and settled into domestic life in London. From the outset, Sally?s relationship with both Tony and his hometown was an uneasy one; she found both to be far more unfamiliar than imagined. But her adjustment problems are soon overshadowed by a troubled pregnancy. When she goes into premature labor, there are doubts whether her child will survive unscathed. And then, out of nowhere, Sally is hit by an appalling postpartum depression?a descent into a temporary, but very personal hell, which even sees her articulating a homicidal thought against her baby. However, when she does manage to extricate herself from this desperate state, she finds herself in a fresh new nightmare, as she discovers that the man she thought knew her better than anyone?loved her more than anyone?now considers her an unfit mother and wants to bar her from ever seeing her child again.

State of the Union: America in the 1960s was an era of radical upheaval?of civil rights protests and anti-war marches; of sexual liberation and hallucinogenic drugs. More tellingly, it was a time when you weren?t supposed to trust anyone over the age of thirty; when, if you were young, you rebelled against your parents and their conservative values. But not Hannah Buchan. Hannah is a great disappointment to her famous radical father and painter mother. Instead of mounting the barricades and embracing this age of profound social change, she wants nothing more than to marry her doctor boyfriend and raise a family in a small town. Hannah gets her wish. But once installed as the doctor?s wife in a nowhere corner of Maine, boredom sets in... until an unforeseen moment of personal rebellion changes everything. For decades, this one transgression in an otherwise faultless life remains buried. But then, in the charged atmosphere of America after 9/11, her secret comes out and her life goes into freefall.