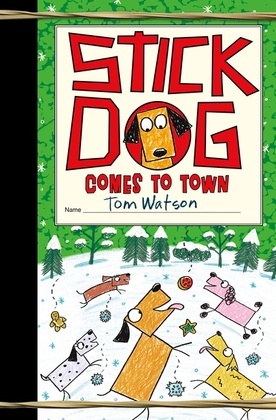 by Tom Watson (Author)
Excerpt
Fiction Juvenile & young adult Themes Animals Dogs Humorous stories
warning_amber
One or more licenses for this book have been acquired by your organisation details
EPUB
26 loans, One at a time
Details

Perfect for fans of Big Nate, Diary of a Wimpy Kid, and the previous Stick Dog books, Tom Watson’s hilarious series continues with Stick Dog and his pals after something even more exciting than food: Santa Claus!

Weird things are happening in Stick Dog’s snow-covered neighborhood. Strangely shaped pinecones hang from trees. Humans sing merry songs all over town. And an odd man is making a list and checking it twice.

Mutt, Karen, Stripes, and Poo-Poo have tons of questions. And for the first time, Stick Dog doesn’t have answers. But their good friend Lucy does.

So when the dogs learn all about Santa Claus, their hilarious quest to celebrate the holiday begins.

The bestselling Stick Dog series is perfect for fans of such series as The Last Kids on Earth, Dog Man, Big Nate, Timmy Failure, and Diary of a Wimpy Kid. A favorite of readers ages 6 to 12, both avid and less so, Stick Dog is a winner for those looking for their next funny illustrated middle grade book series.

Other favorites in the series include Stick Dog Wants a Hot Dog, Stick Dog Chases a Pizza, and many more!