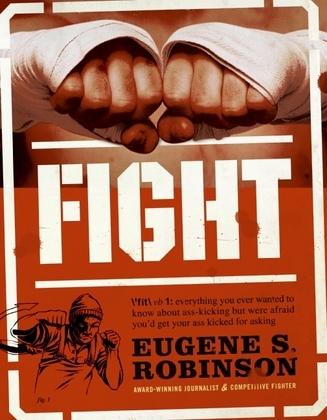 Crushing your enemies, driving them before you, and hearing the lamentations of their women? It doesn't get any better than this." –Eugene Robinson, ripping off John Milius

That's the sentiment that surges just below the surface of Eugene Robinson's Fight – an engrossing, intimate look into the all–absorbing world of fighting. Robinson – a former body–builder, one–time bouncer, and lifelong fight connoisseur – takes readers on a no–holds–barred plunge into what fighting is all about, and what fighters live for. If George Plimpton had muscles and had been choked out one too many times––this is the book he could have written.

Fight is part encyclopedia, part panegyric to fighting in all its forms and glory. Robinson's narrative – told in his trademark tough–guy, stream–of–consciousness noir voice – punctuates this explanatory compendium of the fighting world. From wrestling, jiu–jitsu, boxing and muay thai to bar fighting, hand–to–hand combat, prison fighting and hockey fights, from the greatest movie fight scenes to how to throw the perfect left hook, Fight is a scene–by–scene tour of the bloody but beautiful underworld that is the art of fighting.

With his aficionado's enthusiasm and fast–paced, addictive voice, Robinson's Fight combines compelling text with beautiful photographs to create an illustrated book as edgy and interesting as it is gorgeous.