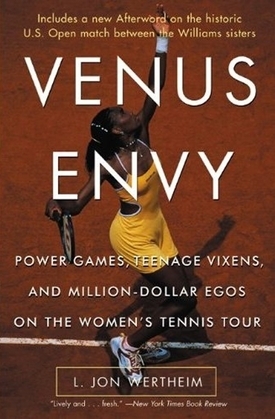 A behind-the-scenes look at the hugely popular and often controversial world of women's tennis featuring such household names as Venus and Serena Williams and Anna Kournikova. At a time when attendance and TV ratings for women's tennis are at an all-time high, Sports Illustrated writer L.Jon Wertheim, draws on his investigative talents and knowledge of the game to infiltrate the heretofore closed locker rooms of the women's tour and chronicle this remarkable era in the sport's history. With a narrative sweep that rockets along like a Venus Williams serve, it takes the reader from the year's first Grand Slam tournament--where a top player ignited a firestorm of controversy when she decided to come out-- to Venus' epochal victory at Wimbledon to the U.S. Open where Serena Williams defends her title and all the whistle-stop tournaments in between where the Russian vixen Anna Kournikova sent hormonally challenged teenagers, not to mention male sportswriters, into a frenzy, Venus Envy offers the reader the equivalent of a center-court seat and an all-access locker room pass. The book will contain a wealth of previously unreported, inside-the-locker room anecdotes about the marquee names in women's tennis and should engender much off-the-book-page coverage. There are more identifiable stars than ever before and the rivalries are intense and often rancorous. The book will even appeal to those readers with only a passing interest in tennis since many of the players have transcended the sport, appearing on the covers of magazine like GQ, Rolling Stone and Vogue.