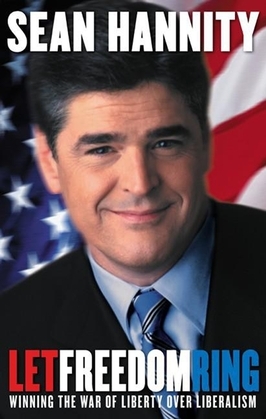 Sean Hannity is the hottest phenomenon in TV and talk radio today. His gutsy, take-no-prisoners interviews and commentary on the Fox News Channel?s Hannity & Colmes has made him one of the network?s most popular personalities. And his ascendance to the top of the talk radio world with ABC Radio?s The Sean Hannity Show has won him a huge and devoted conservative following, and ensured his place alongside Rush Limbaugh and Bill O?Reilly as one of the country?s most influential commentators.

Now, in Let Freedom Ring, Sean Hannity offers a survey of the world?political, social, and cultural?as he sees it. Drawing on stories from his own life, and on the inspiration of political figures like Ronald Reagan and George W. Bush, he recounts the experiences that have shaped his perspective on the dramatic issues that face America today:

? Faith, Character, and the Family

As America meets the challenges of the post-9/11 world?abroad and at home?Sean Hannity?s position is clear: “We are engaged in a war of ideas. And we must win. Civilization itself is at stake.”