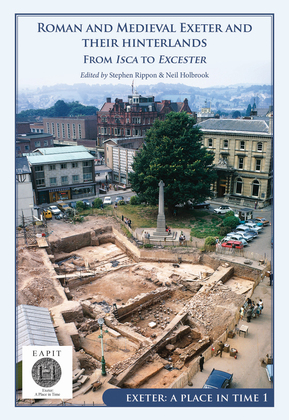 Roman and Medieval Exeter and their Hinterlands

This first volume, presenting research carried out through the Exeter: A Place in Time project, provides a synthesis of the development of Exeter within its local, regional, national and international hinterlands. Exeter began life in c. AD 55 as one of the most important legionary bases within early Roman Britain, and for two brief periods in the early and late 60s AD, Exeter was a critical centre of Roman power within the new province. When the legion moved to Wales the fortress was converted into the civitas capital for the Dumnonii. Its development as a town was, however, relatively slow, reflecting the gradual pace at which the region as a whole adapted to being part of the Roman world. The only evidence we have for occupation within Exeter between the 5th and 8th centuries is for a church in what was later to become the Cathedral Close. In the late 9th century, however, Exeter became a defended burh, and this was followed by the revival of urban life. Exeter’s wealth was in part derived from its central role in the south-west’s tin industry, and by the late 10th century Exeter was the fifth most productive mint in England. Exeter’s importance continued to grow as it became an episcopal and royal centre, and excavations within Exeter have revealed important material culture assemblages that reflect its role as an international port.