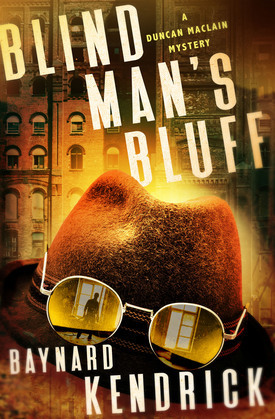 A blind detective rises to the occasion following the suspicious death of a blind financier in this mystery by the author of Odor of Violets.

The Miners Title and Trust is typically dead quiet, having gone bankrupt. Then, late one evening, the bank’s blind president, Blake Hadfield, plummets eight stories to his death in the building’s lobby. The only witnesses are the security guard and Blake’s estranged wife, who were both on the first floor. Blake’s son, Seth, is found drunk and dazed on the eighth floor, making him the prime suspect in what the police believe to be murder.

That’s when Harold Lawson and Sybella Ford call upon Captain Maclain for help. Maclain doesn’t think the banker’s death was a suicide or an accident. He believes someone else was in the building. Now, with the help of his two German Shepherds, Maclain must begin investigating the complicated life of the senior Hadfield. But if the sightless sleuth isn’t careful, he could meet a similar end . . .