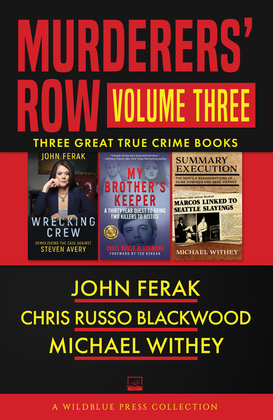 “Whatever you thought you believed about this infamous case, get ready to change your mind or be more convinced than ever . . . Fascinating.” —Steve Jackson, New York Times bestselling author

My Brother’s Keeper: The moment he found out his brother Gary was missing and presumed dead, Ted Kergan launched a relentless effort to bring two suspected killers to justice and find Gary’s body. Little did he know his quest would consume a fortune and take thirty years to reach its dramatic conclusion.

“A thirty-year search for the truth . . . a story of persistence, determination, and deep brotherly love.” —Denise Wallace, author of Daddy’s Little Secret

Summary Execution: On June 1, 1981, two young activists, Silme Domingo and Gene Viernes, were murdered in Seattle in what was made to appear like a gang slaying. But the victims’ families and friends suspected they were considered a threat to Philippines dictator Ferdinand Marcos and his regime’s relationship to the United States.