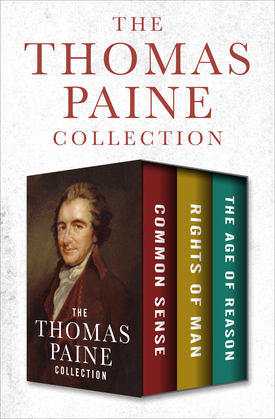 Three works by the political theorist and Founding Father whose impassioned arguments sparked a watershed moment in the progress of democracy.

Common Sense: Originally published anonymously in 1776, this landmark political pamphlet spread across the colonies like no document of its kind had ever done before. It was read aloud in town squares and affixed to tavern walls. Both a plainly stated case for separation from Great Britain and a stirring call to action, Common Sense played a decisive role in America’s march toward revolution.

Rights of Man: This forceful rebuke of aristocratic rule and persuasive endorsement of self-governance became one of the most influential political statements in history. Thomas Paine asserts that human rights are not granted by the government but inherent to man’s nature. He argues that the purpose of government is to protect those rights, and if a government fails to do so, its people are duty-bound to revolution.

The Age of Reason: In this philosophical treatise on theology, Paine rejects the notion of divine revelation, saying “it is revelation to the first person only, and hearsay to every other.” He proceeds with a detailed analysis of the Bible’s inconsistencies and historical inaccuracies to conclude that it cannot be a divinely inspired text. Arguing against all forms of organized religion, he declares nature itself to be the only true testament to the existence of a divine creator.