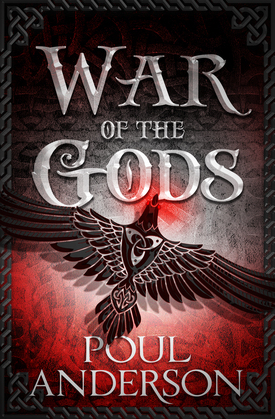 War of the Gods

The Grand Master of Science Fiction delivers “a Dark Age saga based on Old Scandinavian mythology and the exploits of the legendary Danish King Hadding . . . A brilliantly accomplished yarn” (Kirkus Reviews).

In a scheme arranged by the god Odin, Hadding is born to King Gram Skjoldung of Denmark but is sent to be raised by giants for his own safety. After his father is murdered, Hadding must claim his destiny. Prey to the follies of humans and gods, he rises to the challenges of war, fate, and love in a mythic adventure “episodic in character, gory in detail, fatalistic in atmosphere, and spiked with sinister, chthonic Norse magic” (Interzone).

“War of the Gods struck me like a hammer-bolt out of the sky.” —Black Gate

“Anderson has produced more milestones in contemporary science fiction and fantasy than any one man is entitled to.” —Stephen Donaldson

“One of science fiction’s most revered writers.” —USA Today

“The great canvas of interstellar space comes alive under Anderson’s hand as it does under no other.” —Gordon R. Dickson

“One of science fiction’s most influential and prolific writers.” —The Daily Telegraph