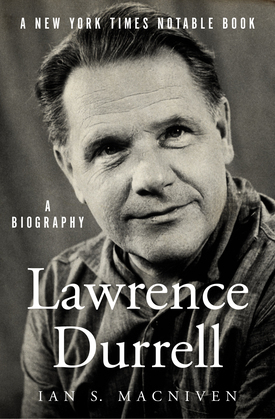 The prize-winning biography of the celebrated author of the Alexandria Quartet and the Avignon Quintet: an “elegant and meticulous . . . treat” (Kirkus Reviews).

Born in colonial India in 1912, Lawrence Durrell established his literary reputation as a citizen of the Mediterranean. After attending school in England, Durrell escaped the country he dubbed “Pudding Island” for the Greek island of Corfu, only to make another escape—this time from Nazi invasion—to Egypt. His experiences in wartime Alexandria led to a quartet of novels, beginning with Justine, that are collectively considered some of the great masterpieces of postwar fiction.

Durrell’s peripatetic life, which eventually took him to the South of France, fed his work with the richness and drama of his various adoptive homes. A man of protean talents, Durrell is celebrated for his fiction and poetry, as well has his highly regarded translations, essays, and travel literature.
In researching this authorized biography, Ian S. MacNiven traveled over a period of twenty years from India to California, interviewing hundreds of individuals and visiting all but one of the many places Durrell lived. The result is an intimate portrait of a literary titan that was awarded a prize by the French city of Antibes for the year’s best study on Durrell.