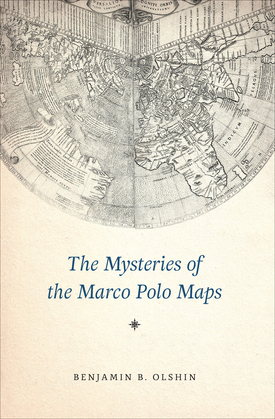 The Mysteries of the Marco Polo Maps

What’s the truth behind the travels of Marco Polo? “A fascinating tale about maps, history and exploration.”—Times Literary Supplement (UK)

In the thirteenth century, Italian merchant and explorer Marco Polo traveled from Venice to the far reaches of Asia, a journey he chronicled in a narrative titled Il Milione, later known as The Travels of Marco Polo. While Polo’s writings would go on to inspire the likes of Christopher Columbus, scholars have long debated their veracity. Some have argued that Polo never even reached China—while others believe that he came as far as the Americas.

Now, there’s new evidence for this historical puzzle: a very curious collection of fourteen little-known maps and related documents said to have belonged to the family of Marco Polo himself. Here, historian of cartography Benjamin B. Olshin offers the first credible book-length analysis of these artifacts, charting their course from obscure origins in the private collection of Italian-American immigrant Marcian Rossi in the 1930s; to investigations of their authenticity by the Library of Congress, J. Edgar Hoover, and the FBI; to the work of the late cartographic scholar Leo Bagrow; to Olshin’s own efforts to track down and study the Rossi maps, all but one of which are in the possession of Rossi’s great-grandson. Are the maps forgeries, facsimiles, or modernized copies? Did Marco Polo’s daughters—whose names appear on several of the artifacts—preserve in them geographic information about Asia first recorded by their father? Or did they inherit maps created by him? Did Marco Polo entrust the maps to an admiral with links to Rossi’s family line? Or, if the maps have no connection to Marco Polo, who made them, when, and why?

Regardless of the maps’ provenance, this tale takes us on a fascinating journey, offering insights into Italian history, the age of exploration, and the wonders of cartography.