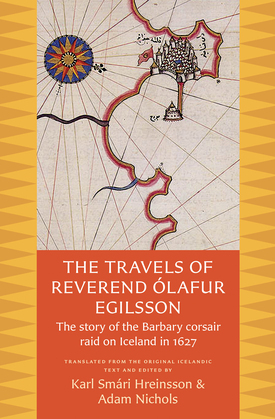 The Travels of Reverend Ólafur Egilsson

A seventeenth-century minister tells his story of abduction by pirates, and a solo journey from Algiers to Copenhagen, in this remarkable historical text.

Reverend Olafur—born in the same year as William Shakespeare and Galileo Galilei—wrote The Travels to chronicle his experiences both as a captive and as a traveler across Europe as he journeyed alone from Algiers to Copenhagen in an attempt to raise funds to ransom the Icelandic captives that remained behind. He was a keen observer, and the narrative is filled with a wealth of detail?social, political, economic, religious?about both the Maghreb and Europe. It is also a moving story on the human level: We witness a man enduring great personal tragedy and struggling to reconcile such calamity with his understanding of God.

The Travels is the first-ever English translation of the Icelandic text. Until now, the corsair raid on Iceland has remained largely unknown in the English-speaking world. To give a clearer sense of the extraordinary events connected with that raid, this edition of The Travels includes not only Reverend Olafur’s first-person narrative but also a collection of contemporary letters describing both the events of the raid itself and the conditions under which the enslaved Icelanders lived. Also included are appendices containing background information on the cities of Algiers and Salé in the seventeenth century, on Iceland in the seventeenth century, on the manuscripts accessed for the translation, and on the book’s early modern European context.