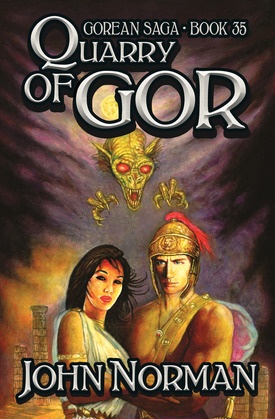 A well-to-do, upper-class young woman, intelligent, fashionable, educated, strikingly beautiful, exploitative, selfish, and haughty, a despiser of men as she knows them, taking them all as manipulable weaklings, meets a mysterious, unsettlingly attractive male at a cocktail party, one who is not only distant and seemingly immune to her brandished charms, but who seems to hold her, to her disgruntlement and indignation, in a subtle contempt.

Later her life undergoes an unexpected, dramatic, and radical change. Seized and shipped with others as cargo, as human cattle, to the beautiful, green, fresh, perilous world of Gor, she finds she is now only an object and beast, a slave. She is collared and branded. Her clothing, if any, and her food, as it might be, are now at the whim of others. She learns to kneel, to address the free as “Master” or “Mistress,” to strive to be pleasing, to obey immediately, beautifully, and without demur, in all things and in any respect, and to kiss a whip and hope that it will not be used on her. Later she meets again, on Gor, the mysterious man she met long ago at the cocktail party, only now she is before him, collared and branded, in a rag, on her knees, a lowly slave.