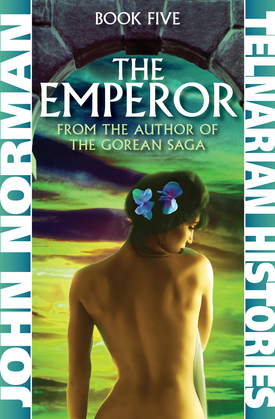 by John Norman (Author)
Excerpt
Fiction Science fiction Adventure Space opera and planet opera
warning_amber
One or more licenses for this book have been acquired by your organisation details
EPUB
Unlimited loans, One at a time
Details

The complexities and storms of the Telnarian Histories are brought to their unexpected and rousing climax.

Following a palace coup, in the midst of intrigue and turmoil, Otto, the blond barbarian giant, King of the Otungs, a tribe of the Vandal Nation, has set aside the boy emperor, Aesilesius, and seized the throne of the vast, unstable, threatened Telnarian Empire. A raging torrent of complex, perilous events ensues. Can the throne be held? Can the empire survive?

In The Emperor, we meet again fierce Abrogastes, the Far Grasper, lord of the Drisriaks, hegemonic tribe of the dreaded Aatii Nation, enemy to the Vandal Nation; his envious, treacherous son, Ingeld, aspirer to the High Seat of the Drisriaks; Sidonicus, devious, unscrupulous exarch of Telnar, seeker of power through the perversion of religion; envious Fulvius, his ambitious subordinate; a corrupt senate, an unruly citizenry, and private armies; Atalana, superstitious and cunning Empress Mother; her son, the reclusive boy emperor, Aesilesius; his lovely sisters, Alacida and Viviana, one of whom will learn chains and the whip; Julian, of the Aureliani, scion of an embittered and divided aristocracy; and many other players in the games of betrayal, blood, and power.