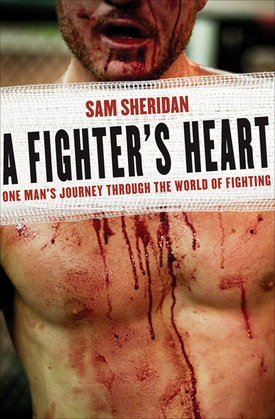 This “whirling, no-holds-barred,” national bestselling memoir of mixed martial arts by the author of The Fighter’s Mind is “adrenaline-addled and addictive” (Playboy).

In A Fighter’s Heart, former merchant marine and Harvard graduate Sam Sheridan shares a “fascinating” first-person account of his life inside the world of professional MMA fighting “and his behind-the-scenes access makes for a gripping read” (Sara Cardace, The Washington Post).

In 1999, after a series of adventurous jobs—construction at the South Pole, ranching in Montana, and sailing private yachts around the world—Sheridan found himself in Australia with time to finally indulge a long-dormant obsession: fighting.

After training in Bangkok at the legendary Fairtex Gym, Sheridan stepped through the ropes for a professional bout, embarking on an epic journey to discover what only a fighter can know about fear, violence, and most of all, himself.

From small-town Iowa to the beaches of Rio, from the streets of Oakland to the arenas of Tokyo, Sheridan trained, traveled, and fought with Olympic boxers, Brazilian jiu-jitsu stars, and Ultimate Fighting champions. This chronicle offers an insightful look at violence as a spectator sport, as well as a dizzying account of what it’s like to hit—and be hit by—some of the best fighters in the world.