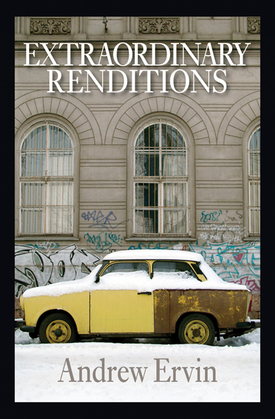 Set in Budapest—a city marked by its rich cultural heritage, the scars of empire, the fresher wounds of industry, and the collateral damage of globalism—Extraordinary Renditions is the sweeping story of three equally tarnished expatriates.

World-renowned composer and Holocaust survivor Lajos Harkályi has returned to Hungary to debut his final opera and share his mother's parting gift, the melody from a lullaby she sang as he was forced to leave his Hungarian home for the infamous Czech concentration camp Terezín. Private First Class Jonathan “Brutus” Gibson is being blackmailed by his commanding officer at the US Army base in Hungary, one of the infamous black-sites of the global War on Terror, and he must decide between going AWOL or risking his life to make an illegal firearms deal in Budapest. Aspiring musician Melanie Scholes is preparing for the most important performance of her career as a violinist in Harkályi’s opera, but before she takes the stage she must extricate herself from a failing relationship and the inertia that threatens to consume her future. As their lives converge on Independence Day, they too will seek liberation—from the anguish of the Holocaust, the chains of blackmail, and the bonds of conformity.

A formidable new voice in American fiction, Ervin tackles the big themes of war, prejudice, and art, lyrically examining the reverberations of unrest in today’s central Europe, the United States’ legacy abroad, and the resilience of the human spirit.

“The variety of viewpoints and the author’s evident intimacy with an ancient foreign capital [Budapest] are promising, and Ervin makes it plain that he is taking on weighty themes.” —The New York Times Book Review

“A thought-provoking exploration of tyranny, freedom, and the power of music.” —Booklist

“Ervin keeps his emotionally and politically fraught setting animated, thanks largely to his skill at inhabiting each of his characters. . . . [Extraordinary Rendition’s] ending makes a poignant case for the power of art in an age of war.” ?Minneapolis Star-Tribune

“Darkly evocative . . . The book has a prismlike quality; each story makes us see the city from a different but overlapping perspective.” —Philadelphia Inquirer