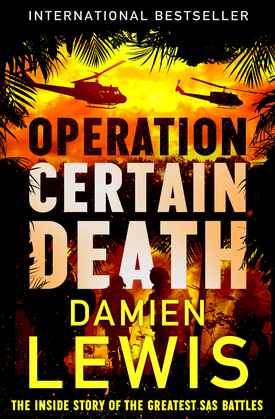 The terrifyingly true tale of a daring British special forces rescue mission and all-out assault on a savage Sierra Leone guerrilla gang: “What a story!” (Frederick Forsyth, #1 New York Times–bestselling author of The Day of the Jackal).

Officially, the SAS mission was called Operation Barras. The men on the ground called it Operation Certain Death.

In 2000, the British Special Air Service (SAS) attempted its riskiest rescue mission in more than half a century. A year before, an eleven-man patrol of Royal Irish Rangers who were training government troops in Sierra Leone was captured and held prisoner by the infamously ruthless rebel forces known as the West Side Boys. Their fortified base was hidden deep in the West African jungle, its barricades adorned with severed heads on spikes. Some four hundred heavily armed renegades were not only bloodthirsty—they were drink-and-drugs crazed. The guerrillas favored pink shades, shower caps, and fluorescent wigs, draping themselves in voodoo charms they believed made them bulletproof—a delusion reenforced by the steady consumption of ganja, heroin, crack, and sweet palm wine. This was the vicious and cutthroat enemy British special forces would confront in order to rescue their own.

Featuring extensive interviews with survivors, this gritty, blow-by-blow account of the bloody battle that brought an end to ten years of Africa’s most brutal civil war is “as good as any thriller I have ever read. This really is the low down” (Frederick Forsyth).