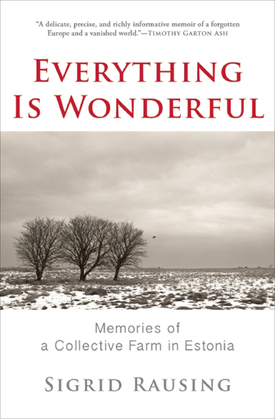 “Pages of dreamlike prose explore Estonia’s terrible Nazi-Soviet past, the trauma of dictatorship, and how memory processes that trauma.” —The Financial Times

A Times Literary Supplement Best Book of the Year

In the early 1990s, after  the collapse of the USSR, Sigrid Rausing completed her anthropological fieldwork on the peninsula of Noarootsi, a former Soviet border protection zone in Estonia. Abandoned watch towers dotted the coast line, and the huge fields of the Lenin collective farm were lying fallow, waiting for claims from former owners who had fled war and Soviet and Nazi occupation.

Rausing’s conversations with the local people touched on many subjects: the economic privations of post-Soviet existence, the bewildering influx of western products, and the Swedish background of many of them. In Everything Is Wonderful Rausing reflects on history, political repression, and the story of the minority Swedes in the area. Here she tells her story of what she observed as she lived and worked among the villagers—witnessing their transition from repression to freedom, and from Soviet neglect to post-Soviet austerity.

“A delicate, precise, and richly informative memoir of a forgotten Europe and a vanished world.” —Timothy Garton Ash