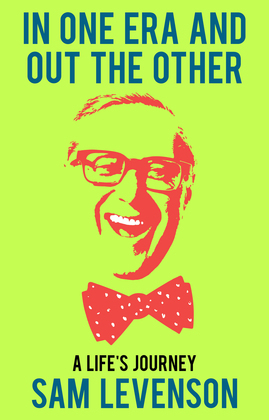 In One Era and Out the Other

The beloved humorist and author Sam Levenson finds that some of his old worldviews don’t fit the new one he now sees. Levenson’s grew up the youngest of eight children in a large Jewish immigrant family in New York. He evolved from a Spanish teacher in Brooklyn to working the Catskills circuit as a comedian. By the 1950s, Levenson was a fixture in American homes as television personality, appearing and guest hosting numerous times on classic shows like This Is Show Business, Two For The Money, and The Ed Sullivan Show. For several years, he hosted his own variety show on CBS called The Sam Levenson Show, where the set doubled as a school classroom and where guests often evoked Levenson’s love of learning, teaching and family. Through his lens, looking back on his life, we see how the world has transformed. His wit and humor make for timeless observations on money, technology, and life, that endeared Levenson to millions of Americans over the last 50 years.