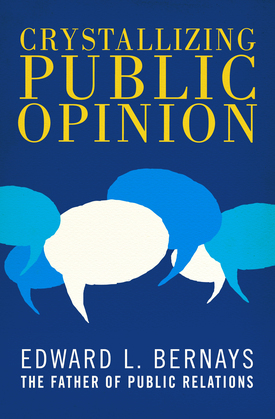 Few books have been as quietly powerful as Edward L. Bernays’s Crystallizing Public Opinion. First published in 1923, it is a groundbreaking and, as history has shown, influential guide to the most crucial principles of mass persuasion. Aimed at governments and corporations in the wake of World War I, this classic work combines crowd psychology with the pillars of psychoanalysis to argue the importance of public relations in democratic society. Citing far-reaching case studies from the resuscitation of a beleaguered magazine in New York to Lithuania’s campaign for global recognition, Bernays illustrates the burgeoning significance of his field in shaping public opinion while also laying out the crucial techniques for mobilizing broad-based support in an increasingly fragmented world.

Celebrated by PBS in its Books That Shook the World feature, Crystallizing Public Opinion occupies a fascinating place in history, defining both a concept and a system that were taken up by progressive social movements, corporate barons, and national governments alike.