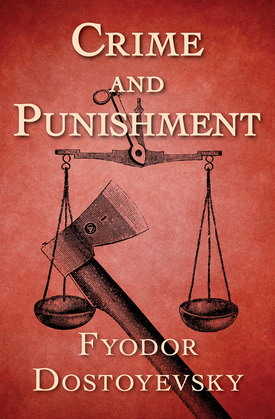 The acclaimed Russian novelist’s epic morality tale of a young man’s horrifying crime and his struggle for redemption.

Rodion Raskolnikov, a young man living in St. Petersburg, devises a gruesome experiment in morality. Theorizing that men of exceptional intelligence have license to kill others, he decides to test his theory with the murder of an elderly pawnbroker. Though no evidence can link him to his crime, it leaves him so deeply disturbed that he fights a constant urge to confess. Despite this, Raskolnikov goes on with his life, contending with his younger sister’s plan to marry a man of dubious character and the fate of an impoverished family for whom he feels responsible.

In Fyodor Dostoyevsky’s acutely observed psychological drama, readers meet an array of brilliantly realized characters. There is Arkady Svidrigailov, the wealthy, married man infatuated with Raskolnikov’s sister; Sonya Marmeladov, the innocent young woman forced by poverty into a life of prostitution; Detective Porfiry Petrovitch, who suspects Raskolnikov but cannot prove his guilt; and Raskolnikov himself, whose horrifying offense leaves him in a long and agonizing struggle toward redemption.

First published in 1866 in the Russian Messenger literary journal, Crime and Punishment met with sensational acclaim and catapulted Dostoyevsky to the pinnacle of literary fame.

This ebook has been professionally proofread to ensure accuracy and readability on all devices.