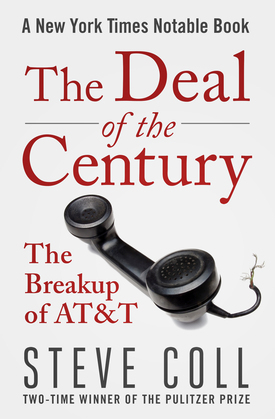 The Deal of the Century

A New York Times–bestselling author’s “superbly reported” account of the dismantling of the world’s largest corporation (The Washington Post).

Written by the two-time Pulitzer Prize–winning author of Ghost Wars and Private Empire, The Deal of the Century chronicles the decade-long war for control of AT&T.

When the US Department of Justice brought an antitrust lawsuit against AT&T in 1974, the telecommunications giant held a monopoly on phone service throughout the country. Over the following decade, an army of lawyers, executives, politicians, and judges spent countless hours clashing over what amounted to the biggest corporate breakup in American history. From boardroom to courtroom, Steve Coll untangles the myriad threads of this complex and critical case and gives readers “an excellent behind-the-scenes look” at the human drama involved in the remaking of an entire industry (The Philadelphia Inquirer).

Hailed by the New York Times Book Review as “rich, intricate and convincing,” The Deal of the Century is the definitive narrative of a momentous turning point in the way America does business.