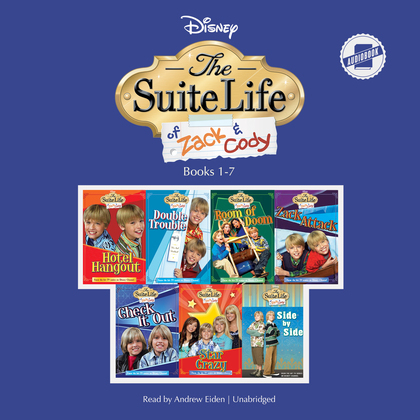 Meet Zack and Cody Martin, identical twins and the newest residents of Boston?s swanky Tipton Hotel. Living in a suite with their mom Carey, the boys treat the Tipton like their own personal playground. But it?s hard to stay out of trouble when they?re constantly pestering candy counter girl Maddie and her friend London, the hotel?s wealthy heiress. This collection includes all seven books in the Suite Life of Zack & Cody series.

At school, Zack and Cody can?t understand why the Drew Crew?the coolest kids in school?won?t pay attention to them. At first, their only friends are a girl named Max and her friend Tapeworm, who earned the nickname by gobbling down twenty hot dogs in under two minutes. But when Zack and Cody finally do get in with the Drew Crew, will the twins leave their real friends behind?

When hotel employee Maddie Fitzpatrick develops a crush on a rich guest, she pretends to be something she?s not?and soon enlists Zack and Cody to help her out of a major jam. Will she come clean about her humble roots ? or keep pretending to be a rich heiress with a bottomless bank account?

Maybe Zack and Cody aren?t the most unusual residents of the Tipton Hotel after all! Rumor has it there?s a ghost in room 613. The twins decide to spend the night in the haunted room to see if the stories are true, but when their hotel friends drop by, a lonely night of ghost-watching suddenly turns into a full-on séance. Zack and Cody soon find out that the only thing scarier than having a sleepover with a snobby teenage hotel heiress is having a sleepover with a pizza-hating ghost named Irene. Will the twins set Irene?s spirit free, or will the ghost of room 613 haunt them forever?

?Zack and Cody can?t believe that the hit television show Go Dance USA is holding a dance contest?right at the Tipton Hotel! Their friend Max, who has the coolest moves of anyone at school, has always wanted to be on the show. Then Max asks Zack to be her partner, and Cody?s feelings are hurt. He wonders why Zack is better at everything. But when Zack gets injured, it?s up to Cody to bust a move with Max. Will the new dance partners win the competition? Or is Cody doomed to be second to Zack forever?

It?s hotel inspection time at the Tipton, and Inspector Ilsa is eager to report any problems. So when two rats from Zack and Cody?s science project escape into the hotel lobby, Ilsa fires the manager, Mr. Moseby, and takes over the hotel! The twins are determined to get rid of Ilsa and put Mr. Moseby back in charge. But Ilsa better watch out, because if she thought the Tipton had problems before, just wait till she sees Zack and Cody in action!

?Zack knows a moneymaking opportunity when he sees one, so when teen pop star Jesse McCartney checks into the Tipton Hotel, he doesn?t waste a second. He sneaks into Jesse?s room and takes whatever he can find?dirty socks, used bath towels, even old chewing gum?to sell to Jesse?s obsessed fans. But has Zack gone too far when he takes the star?s lucky bracelet?

Zack is giving Cody a serious headache. When they start working together at the mini-mart, the only thing that ends up getting shelved is Cody?s pride. Zack keeps getting all the credit for his brother?s work! Determined to show Zack who?s the boss, Cody asks Arwin to build a robot that will help him at the store. But when the robot malfunctions, will Zack step up and save the day?and his brother?s job?