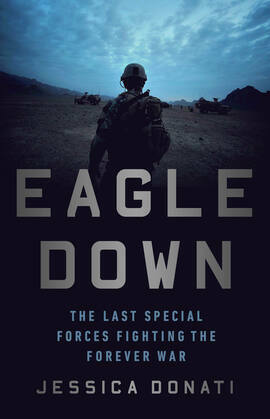 by Jessica Donati (Author)
Nonfiction Biography & autobiography Military
EPUB
Unlimited loans, 2 years, One at a time
Details
A Wall Street Journal national security reporter takes readers into the lives of U.S. Special Forces on the front lines against the Taliban and Islamic State, where a new and covert war is keeping Afghanistan from collapse.

In 2015, the White House claimed triumphantly that “the longest war in American history” was over. But for some, it was just the beginning of a new war, fought by Special Operations Forces, with limited resources, little governmental oversight, and contradictory orders.

With big picture insight and on-the-ground grit, Jessica Donati shares the stories of the impossible choices these soldiers must make. After the fall of a major city to the Taliban that year, Hutch, a battle-worn Green Beret on his fifth combat tour was ordered on a secret mission to recapture it and inadvertently called in an airstrike on a Doctors Without Borders hospital, killing dozens. Caleb stepped on a bomb during a mission in notorious Sangin. Andy was trapped with his team during a raid with a crashed Black Hawk and no air support.

Through successive policy directives under the Obama and Trump administrations, America has come to rely almost entirely on US Special Forces, and without a long-term plan, is failing to stabilize Afghanistan, undermining US interests both at home and abroad.

Eagle Down is a riveting account of the heroism, sacrifice, and tragedy experienced by those that continue to fight America’s longest war.