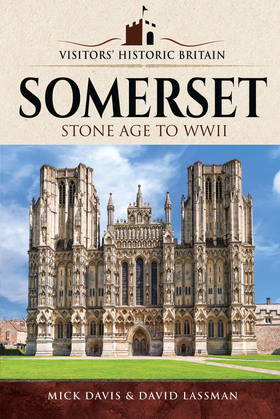 by Mick Davis (Author), David Lassman (Author)
Excerpt
Nonfiction History History by country Europe Great Britain Travel Europe Great Britain
warning_amber
One or more licenses for this book have been acquired by your organisation details
EPUB
Unlimited loans, One at a time
Details
EPUB
40 loans, 10 Concurrent loans
Details
An informative springboard from which to dive deep into the rich and illustrious heritage of the county steeped in the legend of King Arthur.

Every inch of legendary Somerset is imbued with history, from the towns of Dunster and Taunton in the west, to those of Shepton Mallet and Frome in the east; while also contained within its county boundaries are the cities of Bath and Wells and the mystical and magical Isle of Avalon: Glastonbury.

The county, located in southwest England and part of the Ancient Kingdom of Wessex, has played a significant role in many of the nation’s most formative events. These include the Roman occupation, Alfred the Great’s rise to power, the English Civil War and the Monmouth Rebellion.

And all this epoch-making activity has been played out against a landscape of dramatic and breathtaking beauty, from vast tracts of land such as Exmoor, hill ranges such as Mendip and Blackdown and an abundance of incredible rivers, lakes and streams; many situated within the famous Somerset Levels.

Wordsworth, Coleridge and Austen, among many others, have immortalized the county in literature, while everyone from the Celts, Cavaliers and Saxons, to the Roundheads, Romans and rebels have fought over its sought-after resources.

The authors, both living in Somerset, guide you on a fascinating and illuminating trip into the past of this most historical and legendary of counties, which boasts among its attractions the last battle fought upon English soil, the scene of the Bloody Assizes and the final resting place of King Arthur.
Publication date
March 30, 2020
Publisher
Pen & Sword History
Collection
Visitors' Historic Britain
Page count
200
ISBN
9781526706188
Paper ISBN
9781526706164
File size
22 MB