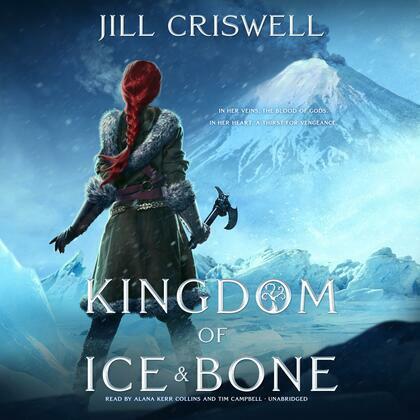 Kingdom of Ice and Bone

Lira and Reyker have lost everything. Including each other.

Lira of Stone watched her home burn and her clan fall beneath the sword of the warlord known as the Dragon. She believes the man she loves, a warrior who defected from the Dragon?s army, is dead. Alongside her exiled brother and his band of refugees, she will fight the forces that conquered her island. But the greatest danger may come from Lira herself?with the blood of banished gods running through her veins, she?s become a weapon, and no one is safe from the power of her wrath.

Reyker Lagorsson thought he was done being a Dragonman. That was before he saw Lira leap from a cliff and vanish into the sea. Determined to honor her memory by protecting her people, Reyker must feign loyalty to the warlord, undermine him at every turn, and seek alliances with renegade soldiers?without succumbing to the battle-madness that threatens to possess him once more.

When the Fallen Ones offer Lira a chance to defeat the Dragon, her quest leads her to a place she never expected?Iseneld, the warlord?s homeland. Her journey into the heart of the Frozen Sun will put her on a collision course with Reyker, costing both of them more than they ever imagined, and leaving her with a terrible choice: to save their countries, she must forsake everything she loves.