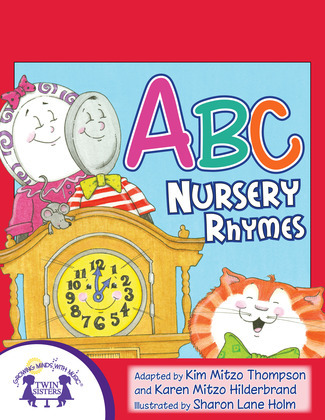 Read the story. Then sing the story! It isn?t a secret that using songs to teach children pre-reading skills is fun and successful. This classic song is featured as a read-along and a sing-along. Young readers will learn the alphabet while enjoying all of their favorite nursery rhymes. The alphabet is illustrated on each page to help little ones point to and say each letter. Children of all ages will love chiming along to Mary Had a Little Lamb, Little Bo Peep, Hickory Dickory Dock, Humpty Dumpty, Oh Where, Oh Where Has My Little Dog Gone?, Little Miss Muffet and Hey Diddle Diddle. Adorable illustrations make learning the alphabet easy and fun! The fun Sing A Story series includes: Five Little Monkeys Jumping On The Bed, Old MacDonald Had A Farm, Ten In The Bed, B-I-N-G-O, Down By The Bay, Humpty Dumpty & Other Nursery Rhymes, Six Little Ducks, Five Little Skunks, ABC Nursery Rhymes, The Wheels On The Bus, This Old Man, How Many Ducks?, Old MacDonald?s Letter Farm, The ABCs, Singing The Consonant Sounds, The Farmer In The Dell and It?s Silly Time!