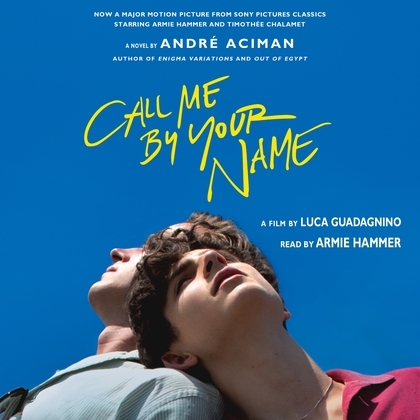 Call Me by Your Name

"...Hammer's voice is brimming with such melody that, if you listen to it long enough, you can probably get drunk off it." ? Vulture.com

A New York Times Notable Book of the Year

A Publishers Weekly Best Book of the Year

A Washington Post Best Fiction Book of the Year

A Chicago Tribune Favorite Book of the Year

Call Me by Your Name first swept across the world in 2007. It is the story of a sudden and powerful romance that blossoms between an adolescent boy and a summer guest at his parents' cliffside mansion on the Italian Riviera. During the restless summer weeks, unrelenting but buried currents of obsession, fascination, and desire intensify their passion as they test the charged ground between them and verge toward the one thing both already fear they may never truly find again: total intimacy. André Aciman's critically acclaimed debut novel is a frank, unsentimental, heartrending elegy to human passion.

More praise for Call Me By Your Name:

"...Armie Hammer (who plays Oliver in the movie) steps effortlessly into Elio's interior world. The result is staggering." ? BookRiot

"a must-listen for anyone familiar with the book or film." ? Buzzfeed

"Hammer?s soft, velvety voice lends itself perfectly to the story and its Italian setting. While you might think this one isn?t worth a listen if you?ve already seen the movie or read the book, many reviewers say it is still worth taking in even if you know the story ? some even say it?s worth listening to more than once." ? AskMen