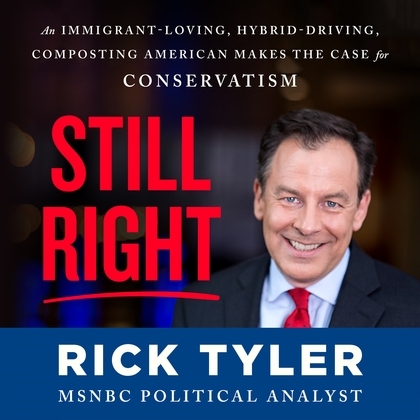 A leading political analyst navigates an unfamiliar terrain of what it means to be a conservative in the Trump Era in Still Right.

Since 2016, ?conservative? has come to mean ?supportive of the policies of the Trump Administration": building his "wall," enacting ruinous tariffs and limiting trade, alienating our allies and kowtowing to dictators, spending wildly, and generally doing the very opposite of what conservatism actually calls for. As a result, millions of Americans are struggling to reconcile their lifelong political identities with what their traditional political party now stands for.

Rick Tyler, MSNBC's leading conservative analyst, shows they are still the ones in the right by making the case for real conservatism, one grounded in principles of liberty, the history of freedom, and simple reason. He explains why it's necessary to have a global view of the economy?and how that includes immigration. He demonstrates the need for protecting our nation with a strong military as well as protecting the planet itself. He discusses what conservatism really asks when it comes to children, healthcare, taxes and elections.

In the end he reclaims conservatism for conservatives?and proves that it's the best way forward for America.

"Rick Tyler has written a remarkable book that describes how the GOP threw overboard the conservatism of Ronald Reagan and John McCain. To read his crisp, lucid, straight-forward book is to rediscover what made the Republican Party great and why it's in need of a rebirth of principles." -- Donna Brazile