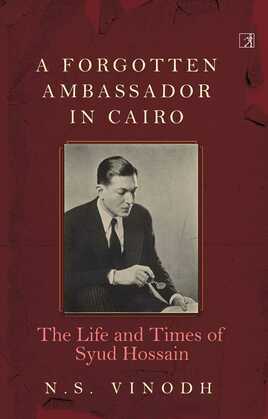 A Forgotten Ambassador in Cairo

Amongst the multitude of tombs in the City of the Dead in Cairo, there lies buried a lone Indian — a scholar, writer, debonair statesman and a leader of the freedom movement. Who is he? How did he get there?
For a man who used both the lectern and the pen to devastating effect during the Indian Independence movement led by the likes of Gandhi and Nehru, little is known of Syud Hossain. Born to an aristocratic family in Calcutta, he forayed into journalism early in life and became the editor of Motilal Nehru’s nationalist newspaper, The Independent. After a brief elopement with Motilal’s daughter, Sarup (aka Vijaya Lakshmi Pandit), Hossain, under immense pressure from Nehru and Gandhi, annulled the marriage and stayed away from the country. Thus began several years of exile.
Eventually, he landed in the United States. Flitting from one place to another, making homes of hotel rooms, he imparted Gandhi’s message across the country. He fought for India’s cause from afar, garnering support in the United States and decrying British oppression. Syud Hossain inspired and irked in equal measure; with every speech he delivered and every editorial he penned, he sent a shiver down the spine of the colonial ruler.
In addition, Hossain took on the fight for Indian immigrant rights in the United States, one that successfully culminated in President Truman signing the Luce-Celler Bill into an Act in 1946. Hossain returned to India to witness the triumph of her independence as well as the tragedy of Gandhi’s assassination. Thereafter appointed India’s first ambassador to Egypt, he died while in service and was laid to rest in Cairo.
A Forgotten Ambassador in Cairo offers an illuminating narrative of Hossain’s life interspersed with historical details that landscapes a vivid political picture of that era. Through primary sources that include Hossain’s private papers, British Intelligence files, and contemporary correspondence and newspapers, N.S. Vinodh brilliantly brings to life a man who has been relegated far too long to the shadows of time.