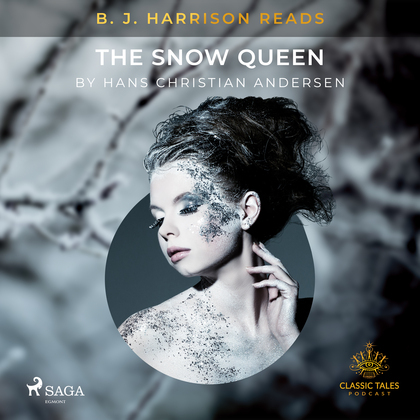 B.J. Harrison reads one of Hans Christian Andersen?s most beloved stories, "The Snow Queen". The devil, who has taken the shape of an evil troll, has created a mirror that freezes the heart and turns everything ugly. But the mirror breaks and shard spread out throughout the world.
Years later, two children named Kai and Gerda hear the story of a terrible Snow Queen. Soon Kai and Gerda are drawn into the world of the mirror and the Snow Queen, who has the power to make everyone forget all that is good. The famous short story has been turned into innumerable literary, film, television and musical versions since its publication in 1844. Films adaptations include the British animated film The Snow Queen (1995), featuring the voices of Helen Mirren and Hugh Laurie.

Hans Christian Andersen (1805-1875), aka H. C. Andersen, is a Danish author, poet and playwright. Andersen has written fairy tales and stories known that are popular throughout the world. His fairy tales include The "Little Mermaid", which has since been turned into the beloved Oscar-winning Disney animation film The Little Mermaid (1989), and "The Ugly Duckling". Andersen?s stories are mostly read as children's stories, yet they provide lessons and twists for readers of all ages.