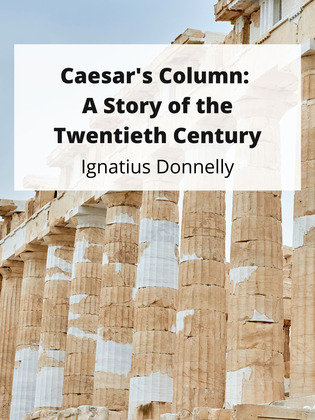 As some other speculative writers did (Anna Bowman Dodd's 1887 book The Republic of the Future is a contemporaneous example), Donnelly cast his fiction in the form of an epistolary novel. His first-person narrator Gabriel Weltstein writes a series of letters to his brother, recounting his experiences during a 1988 visit to New York. Weltstein is a wool merchant from Uganda (early Zionist thinkers considered the possibility of founding a Jewish state in Uganda). Weltstein wants to avoid dealing with an international cartel and sell wool directly to American manufacturers.

Like many utopian/dystopian writers, Donnelly dwells on the technological changes of the future. Weltstein travels to New York City by airship; he is dazzled by the city's brilliant illumination, powered by tapping into the Aurora Borealis. In the city, subways operate below transparent sidewalks. At the Hotel Darwin, Weltstein finds a televised menu to guide him among exotic choices, from edible spiders to bird's nests from China. Televised newspapers are readily available.

Weltstein soon gets into trouble, when he stops a coachman from beating a beggar. The coach belongs to Prince Cabano, formerly Jacob Isaacs, a prime figure of the ruling oligarchy; the beggar is Max Petion, actually a leader of a secret resistance organization called the Brotherhood of Destruction. Weltstein has to accept Petion's guidance into proletarian society in New York City, where he learns the truth of the rapacious and oppressive social and economic order.

Gabriel meets the president of the brotherhood, Caesar Lomellini, a dangerous and ruthless fanatic and an imposing physical presence, half Italian and half Negro. The middle section of the novel devotes attention to the romantic involvements of Gabriel and Max Petion, who rescue young women from exploitation. The two couples marry in a bucolic episode that counterpoints the scenes of urban oppression and violence that bracket it. (The four characters escape New York for Uganda at the end of the book, providing a sort of happy ending, which likely enhanced the novel's popularity.)

The Brotherhood of Destruction finally organizes a rebellion, which succeeds in deposing the oligarchs, though at the cost of massive casualties. (Technology has produced advanced weapons like "dynamite bullets" that increase the carnage.) Lomellini orders the corpses piled high in Union Square and entombed in layers of concrete—though Lomellini himself is murdered as the mass grave is started. Gabriel Weltstein, fleeing New York by airship, looks back to see the vast cityscape in flames, while the mass grave—Caesar's column—rises through the smoke. (Source: Wikipedia)