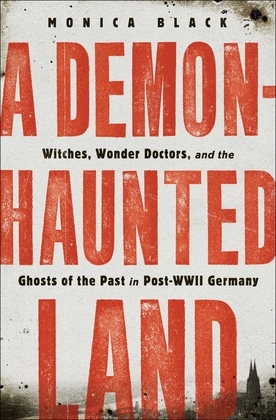 A revelatory counterhistory of postwar Germany, not as a reborn democracy but as a nation convulsed by apocalyptic visions, witchcraft trials, and supernatural obsessions

In the aftermath of World War II, a succession of mass supernatural events swept through war-torn Germany. A messianic faith healer rose to extraordinary fame, prayer groups performed exorcisms, and enormous crowds traveled to witness apparitions of the Virgin Mary. Most strikingly, scores of people accused their neighbors of witchcraft, and found themselves in turn hauled into court on charges of defamation, assault, and even murder. What linked these events, in the wake of an annihilationist war and the Holocaust, was a widespread preoccupation with evil.

While many histories emphasize Germany?s rapid transition from genocidal dictatorship to liberal democracy, A Demon-Haunted Land places in full view the toxic mistrust, profound bitterness, and spiritual malaise that unfolded alongside the economic miracle. Drawing on previously unpublished archival materials, acclaimed historian Monica Black argues that the surge of supernatural obsessions stemmed from the unspoken guilt and shame of a nation remarkably silent about what was euphemistically called ?the most recent past.? This shadow history irrevocably changes our view of postwar Germany, revealing the country?s fraught emotional life, deep moral disquiet, and the cost of trying to bury a horrific legacy.