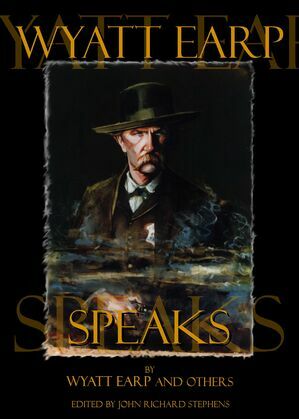 Legendary lawman Wyatt Earp entered Wild West history with his guns blazing and people have been fighting about him ever since. His exploits have become so distorted by many books and movies that, chances are, almost everything you know about Wyatt Earp and the O.K. Corral Gunfight is wrong. Over the years so much has been made up about what happened that the truth is now deeply buried under a pile of distortions, faulty inferences, embellishments, and outright lies.

For the first time ever, Wyatt Earp's writings, court testimony, newspaper interviews and other hard-to-find items from contemporary sources are brought together in this collection. Wyatt Earp himself explains his side of the gunfight near the O.K. Corral and his experiences as a frontier lawman in Tombstone and Dodge City.

This unique book also includes several interviews with Doc Holliday, Bat Masterson's tributes to Wyatt and Doc, a shot-by-shot reconstruction of the famous gunfight with diagrams, and is lavishly illustrated with maps, drawings and photographs.

Now find out what really happened at the infamous gunfight near the O.K. Corral--which was one of the largest shootouts in Wild West history--and what life was like in the lawless wilds in and around Tombstone, Arizona. In this wonderful sourcebook, discover what Wyatt and Doc had to say about the events that made them famous.

"One day six of the cowboys came into town and proposed to run it. The Earps were informed of their doings and they invited me to go over to where the cowboys were. One of the Earps said, 'Throw up your hands; we have come to disarm you.' Instead of putting up their paws they put up their revolvers and began firing." --Doc Holliday

"Bullets were flying so fast that I could not keep track of them. Frank McLaury had given a yell when I shot him and made for the street with his hand over his stomach." --Wyatt Earp