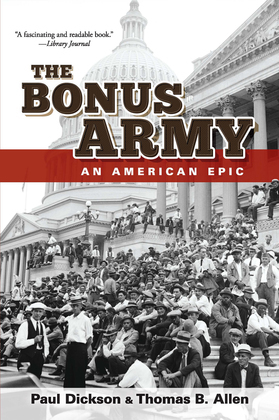 In the summer of 1932, 15,000 World War I veterans marched on Washington, D.C., demanding payment from the Herbert Hoover administration of the bonus promised to them eight years earlier for their wartime service. With the "bonus bill" defeated in the Senate, the U.S. Army, led by Army Chief of Staff Gen, Douglas MacArthur, deployed tanks in the capital to rout the protestors.
This highly praised account of the event is based on extensive research that includes interviews with the last surviving witnesses. Paul Dickson and Thomas B. Allen recapture the voices of former soldiers who dared to challenge the government and demand what they were denied. The authors trace the Bonus Army's history and discuss its far-reaching effects, including how it paved the way for the 1944 passage of the GI Bill of Rights, which transformed American society by creating the postwar middle class.

"A revealing and fascinating account. The book's most haunting aspect is its verbal and pictorial record of the marcher's individual experiences." ? Janet Maslin, The New York Times

"Exactly the kind of book publishers should be giving us more of ? responsible popular history, researched to the footnoted standards of the academy but written for the pleasure of general readers who are looking for a good story . . . A rewarding book." ? Kevin Coyne, Newsday

"A feat of research and analysis ? a thoughtful, strong argument that these marches were among the most important demonstrations of the 20th century." ? Bookmarks Magazine

"As Dickson and Allen show throughout this empathetic and well-researched volume, [the Bonus Expeditionary Force] meant different things to a number of groups vying for power in the tumultuous political climate of the early '30s. Their important and moving work will appeal to both professional historians and casual readers interested in the history of America's changing attitudes toward its soldiers." ? Publishers Weekly